What are Wolf Spiders and How to Get Rid of Them?

What are Wolf Spiders and How to Get Rid of Them?

What are Wolf Spiders?

The family of wolf spiders includes generally big, hairy, active arachnids. Wolf spiders are the stinging insects hunt alone, not in packs, and pursue their prey in a manner akin to wolves rather than trapping it in webs.

According to the Integrated Taxonomic Information System, there are 125 genera and almost 2,400 species of wolf spiders. They exist throughout the world and in the United Kingdom. Grasslands and meadows are where wolf spiders are most prevalent, but they can also be found in mountains, deserts, rainforests, and wetlands.

The egg sac of a female wolf spider is carried unusually by being fastened to her spinnerets at the back of her abdomen. She later carries her children on her back.

The two centre eyes of the top row are larger, resembling the arrangement of eyes in jumping spiders. Wolf spiders have a row of four tiny eyes in addition to their four bigger eyes, unlike jumpers. Wolf spiders also hunt at night and move quickly across the ground, whereas jumpers move jerkily, jump far, and hunt in plants during the day. 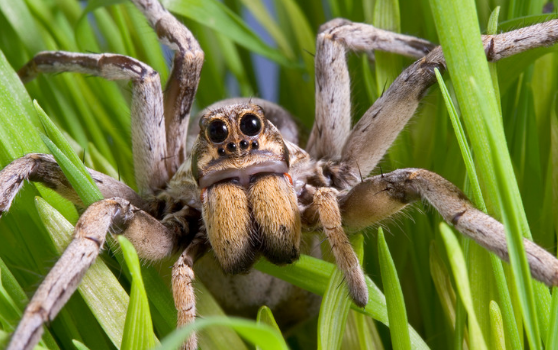 Although wolf spiders may appear dangerous, they are not. When they are threatened, they will bite. While the bite stings and leaves a red mark, it is not a fatal or hazardous bite.

The best method of treatment for wolf spider bites is to apply an ice pack. The swelling and irritation are reduced by anti-inflammatory over-the-counter drugs and anti-itch ointments. Even though the bite may hurt right away, it stops hurting after a short while. Although the bite may swell, it goes away in a day or two. The itchiest feeling last the longest.

How To Prevent Wolf Spider Infestation?

How to Get rid of them? 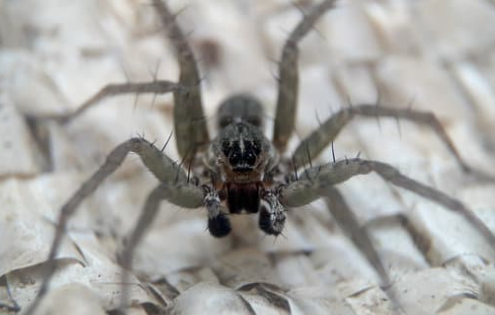 A sticky adhesive surface is used in inexpensive spider traps that are available on Amazon.com to capture stray spiders. They are a thick layer of cardboard or a cardboard structure covered in an adhesive solution that is sticky and tacky, much like a sticky fly trap. The idea behind the trap is that spiders who step on it stick to it, starve to death or are removed securely.

Wolf spiders prefer dark corners, so set the traps up in places with low lightings, such as basements, garages, and closets. This is an excellent non-toxic, healthy product to use at home where there may be young children or pets.

Wolf spiders can be eliminated with Hexa-hydroxyl-containing plant-based insecticides. It is available as powder or granules that are safe for use by both people and animals. This is a fantastic option for use on lawns and other big outdoor areas.

Simply use a granular spreader to apply the insecticide. It is advisable to use granular goods before it rains because some of them need water to activate them, so check the manufacturer’s instructions.

I hope the article on what are wolf spiders will be useful for you and the above mentioned control methods can defend only for few days. Hire a professional pest control service to get rid of all the types of spiders and other pests for years.

Carpenter bees are the largest bee species and they are aggressive to their enemies when threatened or disturbed. Though bees...

How to Spider-Proof your basement?

Spiders are the introverted pests that always keep themselves safe and they will stay away from humans and their predators....

Peppermint is also called Mentha Balsamea scientifically, which is a hybrid mint. It is a cross breed derived from watermint...