Among the most feared pests, Hornets are a species of wasp. 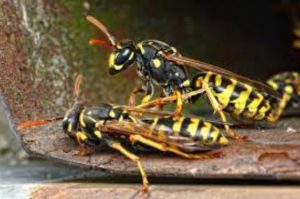 Though the European hornet bears similar markings to Yellow Jackets, they are distinguishable in length and width.

Also, unlike bees or other members of the wasp family, their sacs, which carry poison, can hold a higher volume.

This means that their stings are likely to be more painful due to the amount of venom injected per puncture.

It is thought that hornets can sting up to five times in a very short period, and they’re highly aggressive as a species.

Like other species of wasp, they are extremely protective of their nest, and when in danger, or if they believe the nest is at risk, they release pheromone; a chemical that alters the behaviour of others within its species.

This signals those in the nest to help, which is likely to be fatal to the human in question, as nests can host as many as 5000 hornets at once, if not a larger community.

Although hornets are considered to be the most aggressive species of wasp, they prefer not to sting repeatedly unless they feel they or their nest are at risk.

This is thought to be because they would rather spare their poison to paralyse their prey.

Though a few stings may sound like very little risk, especially from an insect however many times smaller than us, it can be fatal in cases of swarms and acute allergic reactions, also known as anaphylactic shock.

If you have been stung, it is important to check to see if the hornet has left its stinger in the wound.

If so, carefully disinfect the area with soapy water and remove the abandoned stinger using a pair of fine tweezers. For pain, ice packs every few minutes will do just fine.

If, however, you believe someone is having an allergic reaction to a hornet sting, medical assistance is essential for relieving potentially fatal symptoms.

Last, but certainly not least, if you have spotted a hornet’s nest in your garden or your home, or you have reason to believe you have a nest hiding away, get in touch with a specialist, like us here at Pest Control London.

Not only can we provide effective pest control in London, but also we make both efficiency and safety priorities.

For more information, see our site and blog or contact us today.

The film industry makes a habit of dramatising certain scenes in our favourite horror movies, even those based on a...

Insect swarms can be extremely dangerous, and not just to us. During a swarm, our property, pets and plants are...

The UK is currently home to as many as 34 mosquito species, and anywhere you visit in the world, there...