They may be regarded as cute, furry creatures who love climbing trees and stealing food from bird seed feeders, but pest control for squirrels is sometimes necessary due to their habits and prevalence within Greater London and the UK in general.

As the red squirrel is more or less absent from the Greater London area, when considering the species overall, we will always consider the grey squirrel as the likely suspect. By their nature, grey squirrels are more aggressive than their red furred cousins and it is for this reason that you can expect the grey squirrel to cause the issues.

With this in mind, it is perhaps wise to look at how grey squirrels can cause a lot of issues in the short and long-term and how they can be dealt with professionally and efficiently. 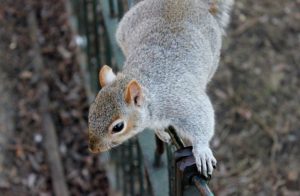 You might be surprised to hear that grey squirrels are the cause of damage to woodland and trees in both parklands and in gardens across Greater London.

It is estimated that squirrels caused anywhere between £6 – £10 million pounds in damage to trees across the UK and a large part of that is within the Greater London area. Squirrels can strip back the bark of oak, beech and chestnut trees and they do not discriminate against young or old trees.

There is so much concern regarding squirrel activity that the European Squirrel Initiative was set up to protect woodland across Europe. This initiative has become so necessary in recent years that it is expected to expand to cover large parts of the UK, including the Greater London area.

Squirrels and Your Home

Because squirrels are fond of climbing trees and therefore can climb great heights. Often they will clamber up trees and end up working their way into the roofs and other openings in the roofing area.

With this tendency to clamber onto roofs and work their way into loft areas, squirrels will invariable end up gnawing away at wood and electrical cables over time (any electrician will tell you how annoying squirrels can be for them!). Added to this that squirrels have been known to leave their droppings and contaminate water tanks with their urine – it is for this reason squirrels pose both a health and structural concern.

It’s not just the roof and buildings which are under threat from squirrels. They have been known to attack bird nests and bird feeders as these are sources of food for them. This can cause problems in the garden, particularly if you want to protect your local wildlife and avoid any conflict between your pets and squirrels.

Even though you may see squirrels throughout the day, squirrels are also nocturnal animals too. They are often active four to five hours before sunrise and will return to their nests before sunset. This can mean that squirrels can and will scurry around in the early hours, causing noise and a nuisance for those who may have them living in their loft area. Expect your sleeping patterns to be disturbed whilst you have a squirrel infestation.

As mentioned, squirrels will make themselves at home in any back garden and can cause problems with domestic pets and local wildlife. Grey squirrels are noted for their aggressiveness and will defend food sources and their territory viciously if necessary.

Pest control for squirrels can be necessary at times. In an area such as Greater London, where gardens and parkland are located close to one another, squirrel activity will never be far behind.

Officially, squirrels are not categorised as vermin but as a rodent however many in the pest control field and local environmental authorities regard them as vermin in all but name.

It must also be noted that it is technically illegal to trap and kill squirrels. If one is inadvertently trapped, then squirrels must be humanely killed by a professional pest control company. Failing to do so is a breach of the law and prosecutions have been made against those who have been found to have destroyed a squirrel in an inhumane way.

Pest control for squirrels is the responsibility of a professional pest control company. Due to the legal status and behaviours of squirrels, it is best to contact professionals who will be able to tackle the problem efficiently and humanely.

Moth pest control has become increasingly needed in recent years. Many people do not take the necessary steps to prevent...

In much the same way as Wasps, Bees pest control becomes a priority for many during the springtime. It is...

As the winter makes way for the spring, wasp pest control becomes more prominent in the minds of many. It...