The UK is currently home to as many as 34 mosquito species, and anywhere you visit in the world, there is always a risk of diseases spreading through bites.

However, could our home country be becoming more susceptible to exotic diseases spread by these insects? 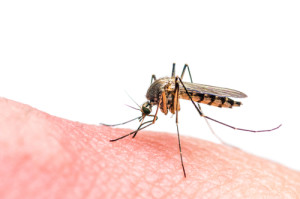 According to the BBC, there is a growing risk that these insects could bring exotic diseases across the border, including West Nile virus and dengue fever.

Though it is stated that this is likely to happen over the next couple of decades, it is still something to be aware of, especially if your home frequently experiences visits from mosquitoes.

Ultimately, this is thought to be because of rising temperatures here in the UK, providing more suitable conditions for breeding.

In saying this though, the article also states that climate change is just one of a list of factors that play a huge role in the spread of dangerous diseases.

Public Health England commented on this, saying that the body has been closely monitoring likely breeding areas.

Various areas of Europe are already vulnerable to the spread of disease, with the number of mosquitoes and ticks increasing.

Both of these insects are also said to be “highly responsive to changes in temperatures and rainfall”.

A report reviewing the situation on the ground revealed that rising temperatures in our home country could, in fact, offer an ideal habitat to a particular species of mosquito, known as the Asian Tiger mosquito.

This species of insect is known for spreading viruses that can develop into chikungunya and dengue.

To get a clearer picture, climate change modelling was used, which suggested that if temperatures were to rise again, even by just a couple of degrees, the activity of these insects, as well as parasites, could increase as a result.

This is especially the case in southern England.

Although, a conclusion was reached that this cannot be predicted with confidence, due to accuracy.

At the moment, it is thought that the UK is ideal for the spread of West Nile virus, though currently there have been no reports of such a disease in humans.

“all invertebrates were affected by changes in temperature.”

“They develop faster at higher temperatures so during a mild winter they won’t be killed off.”

“In summer, they will then be more abundant, although dry summers are not good for mosquitoes.”

“But they can survive in water butts in gardens.”

To read more about a likely place for mosquitoes to lay their eggs, please click on the link provided above.

If temperatures do continue to rise,  pest control experts all around the UK, including London, may be facing their toughest challenge yet. However, if you are suffering from an infestation or you have your doubts, it’s worth getting in touch with a specialist pest company, like us, to review the situation.

It is not uncommon for people to fail when tackling issues of pest control in east London. Depending on the...