Insect swarms can be extremely dangerous, and not just to us.

During a swarm, our property, pets and plants are all susceptible, which is why it is so important to contact Pest Control in London to stop an infestation in its tracks.

However, if you don’t know much about insects and their behaviour, it can be difficult to identify the risk of a swarm, and even if invading insects will swarm at all.

Focusing on the latter, below we have compiled just three insects prone to swarming, and the dangers of each, both present in the UK and further afield. 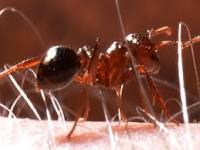 There are two species of ant to be particularly wary of when it comes to swarms; fire ants and army ants.

Though they tend to be native to warmer climates, fire ants can be extremely unpleasant when they bite, leaving behind not only a painful experience but often a red mark on the skin too.

Unfortunately, though you may think you’ve just disturbed one, it is likely others will soon follow, which is why it is so important to be vigilant for this species in your garden.

When fire ants bite, they pass on venom, which gives them their apt name, as it is often described as a burning sensation.

Whilst there are very few reports of humans being killed by this species, if you have an allergy, a swarm can be fatal. 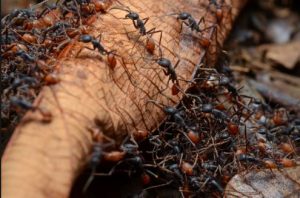 Moving on, renowned for their close-knit behaviour and community, army ants have a horrible tendency to hunt in, well, an army.

They attack as such and use their powerful jaws to dismember prey, bit by bit.

Fascinatingly though, when faced with challenges, such as an open body of water, they will group together to form a bridge that enables the colony to pass over safely.

Although this insect itself doesn’t flag warning signs when it comes to the danger they directly pose to humans, they can become uncontrollable and more than an utter nuisance.

You see, locusts target farms and the like, devouring crops as they go, resulting in an acute economic crisis if the swarm becomes too much to handle.

Luckily, locusts haven’t made their way to the UK as of yet. 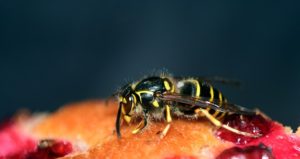 Wasps, and, in particular, yellow jackets, can give a nasty sting when provoked, as most of us will know.

But, imagine facing an entire swarm…

Not only are yellow jackets able to repeatedly sting without causing injury to themselves or dying, but they tend to be aggressive, especially when their nest is being threatened, which is why pest control services are often the only option when it comes to an infestation.

Not just fatal to those with allergies, a swarm of yellow jackets can be extremely dangerous, if not deadly.

So be sure to keep a close eye on susceptible spots in your garden, and contact experts accordingly.

These are just three insects prone to swarming, both in the UK and abroad.

If you suspect you may have an infestation problem, or you’re concerned your property provides the perfect breeding ground, contact us today at Pest Control London.

We would be happy to take your call and more than happy to advise and carry out the appropriate measures.

The UK is currently home to as many as 34 mosquito species, and anywhere you visit in the world, there...